Researchers from ICN2’s Phononic and Photonic Nanostructures (P2N) Group published a study where the complex dynamics, including chaos, of optical nonlinearities are controlled by using optomechanical crystals and changing the parameters of the excitation laser. This discovery might allow the codification of information by introducing chaos into the light carrying it.

Barcelona, Tuesday April 18 2017. Light is essential for modern communications based on optical fiber. Optomechanical crystals are designed at nanoscale to allow the confinement of photons and mechanical motion in a common physical volume. Such structures are being studied in complex experimental setups and might have an impact in the future of telecommunications. The interaction of the photons and the mechanical motion is mediated by optical forces leading to a strongly modulated beam of continuous-wave light after interacting with an optomechanical crystal. In optomechanics, optical nonlinearities are usually regarded as detrimental and efforts are made to minimise their effects. ICN2 researchers suggest using them to transport codified information. Initiatives such as PHENOMEN, a European project led by ICN2, lay the foundations of a new information technology by combining photonics, radio-frequency (RF) signal processing and phononics.

Researchers from the Phononic and Photonic Nanostructures (P2N) Group, led by the ICREA Research Prof. Dr Clivia Sotomayor-Torres at the Institut Català de Nanociència i Nanotecnologia (ICN2), published an article in Nature Communications presenting the complex non-linear dynamics observed in a silicon optomechanical crystal. Dr Daniel Navarro-Urrios is the first author of this article describing how a continuous-wave, low-power laser source is altered after traveling through one of these structures combining optical and mechanical properties of light and matter. The article includes authors from Department of Physics – Universidad de La Laguna (Spain) and Nanophotonics Technology Center – Universitat Politècnica de Valencia (Spain).

The paper reports on the nonlinear dynamics of an optomechanical cavity system. The stable intensity of a laser beam was affected by factors such as thermo-optic effects, free-carrier dispersion and optomechanical coupling. The number of photons stored in the cavity affects and is affected by these factors creating a chaotic effect that researchers were able to modulate by smoothly changing the parameters of the excitation laser. The authors demonstrate accurate control to activate a heterogeneous variety of stable dynamical solutions.

The results of this work set the foundations of a low-cost technology reaching high security levels in optical communications using chaos-based optomechanical cryptographic systems. It is possible to introduce dynamical changes in the light beam traveling through an optical fiber by using an optomechanical crystal. The original light conditions could be reestablished given the parameters of the excitation laser and the optomechanical crystal that introduced those dynamical changes are known. Thus, by linking with optical fibers two integrated chips containing equivalent optomechanical cavities it is possible to secure information introducing chaos in the light beam at the emitting point and suppressing it at the reception point. 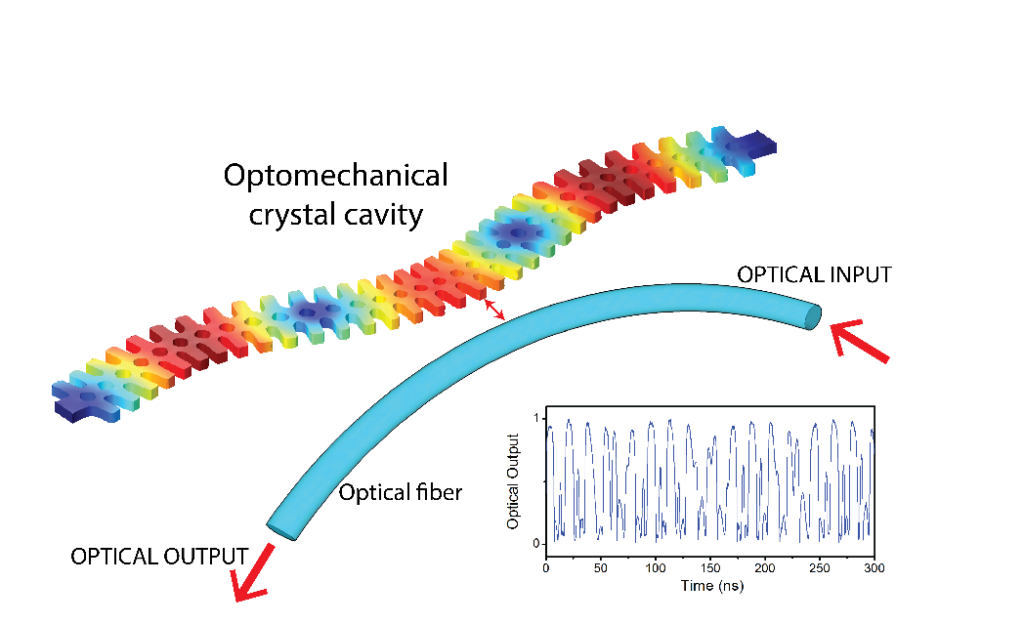 Fig. 1. The optical input is altered by optical nonlinearities when travelling through an optomechanical crystal. Non-linear dynamics modulate the optical output of the system. The original input could be restored provided the parameters of the excitation laser and the optomechanical crystal that introduced the dynamical changes are known.