Nonlinear dynamics and chaos in an optomechanical beam 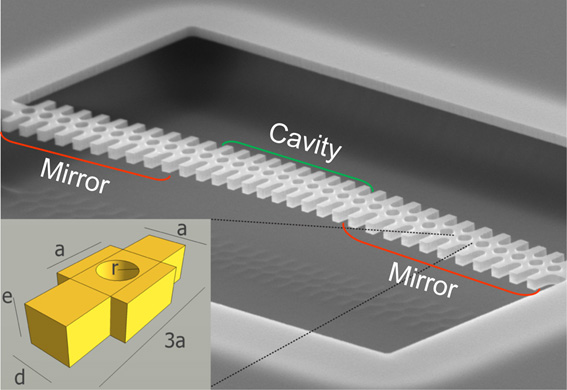 Optical non-linearities, such as thermo-optic effects and free-carrier-dispersion, are often considered as undesired effects in silicon-based resonators and, more specifically, optomechanical (OM) cavities, affecting the relative detuning between an optical resonance and the excitation laser. However, the interplay between such mechanisms could also enable unexpected physical phenomena to be used in new applications. In the present work, we exploit those non-linearities and their intercoupling with the mechanical degrees of freedom of a silicon OM nanobeam to unveil a rich set of fundamentally different complex dynamics. By smoothly changing the parameters of the excitation laser, namely its power and wavelength, we demonstrate accurate control for activating bi-dimensional and tetra-dimensional limit-cycles, a period doubling route and chaos. In addition, by scanning the laser parameters in opposite senses we demonstrate bistability and hysteresis between bi-dimensional and tetra-dimensional limit-cycles, between different coherent mechanical states and between tetra-dimensional limit-cycles and chaos. As a result of implementing the Rosenstein algorithm to the experimental time series we have extracted a Largest Lyapunov Exponent of LLE=1.3×10^5 s-1, which is between one and two orders of magnitude lower than the typical oscillating frequencies of the system. Most of the experimental features can be well reproduced with a model of first-order non-linear differential equations coupled through the number of intracavity photons. Our findings open several routes towards exploiting silicon-based OM photonic crystals for systems with memory and, more specifically, for chaos based applications such as secure information transfer or sensing.